The holidays are, for many of us, a nostalgic time; the one time in the year where we look back on the past. Whether it be memories from our childhood where the Christmas lights seemed to shine a little brighter and the tree stood just a little bit taller. Or we look back on the year; the good memories or those moments you may not be so proud of. For me, this year in particular was one of abounding change… but one specific memory sticks out in my mind.

On a particularly blistering hot August Tuesday at Trenton Pet Hospital, I was just settling down at my desk with my morning coffee when my phone buzzed loudly in my purse. When I answered, my fathers’ voice was on the other end. He immediately asked if I had received his last text (which I did) and if I could help him with something. As I recalled back to the image he sent me of a mangy looking dog he had spotted outside his house several times over the weekend, I wondered where this was going.

He told me that this dog was now on the front lawn and he doesn’t look good so he needed the number of animal control. I instructed him not to do anything just yet and that I was on my way.

I grabbed a slip leash from the treatment room, gave a brief explanation to my team and as I was running out the door I heard the warnings of those who were trained to deal with situations like this. Unfortunately, I was not.

Let me add in a small disclaimer here, if you or someone you know sees an animal in need of help, please do some research and use caution if approaching. Calling animal control or your local clinic for advice or help is always the best first step.

Okay, fast forward about a six minute car ride and there I was pulling into my family’s driveway. To my surprise I saw my step-mother, Donna, gently holding what looked like a very old yellow lab. As I parked my car to the right of them, I gently opened the door and stepped out with the leash coiled in my hand. The dog looked at me with obvious uncertainty, tail slightly tucked and ears back. I tried to recall the training videos I had been watching on canine aggression and noted that his hackles weren’t up and he wasn’t showing his teeth or licking his lips. He just looked terrified.

I turned so my side was facing them and knelt so I was about the same height. He didn’t make a sound, but from the corner of my eye I saw his tail drop and begin to move side to side ever so slightly. As I inched closer, the sight before me became much clearer.

This dog was not old at all. In fact the closer I got, the more puppy-like features I could see. But there was something else; his body was thin and frail, his eyes slightly sunken and small patches of his fur were matted with dried blood. Finally I was about a foot away and as I turned to face him, he sat down … and this is when my heart sunk. As he began to sit, his whole body trembled with resistance. His two back feet splayed in opposite directions and I could count the seconds it took for him to complete the task. He was in a lot of pain.

I slipped the leash around his neck and asked my parent’s what they wanted to do. They told me that if this pup has a home, they want him to find it. But, if no one claims him, they felt he had come to them for a reason.

Fast forward about a ten-minute car ride later (come on, I had a baby on board!), I pulled back into the clinic parking lot.

Over the next few days, this pup was the centre of my universe. I went with him into his appointments, sat with him as I called clinics and shelters, took photos of him to post on every network I could. The more time I spent with him, the more I selfishly thought, I can’t let go of him now…

Here was my fear: If this pup had any sort of hip dysplasia, which would be a permanent issue that would take buckets of money for any clinic to diagnose and treat. If it was anything else, he at least has a chance.

After completing a blood test, one of the girls came in and gave me the news: He was Lyme positive.

Now, this was probably the first and last time I would ever be relieved to hear those words. But this meant that he could be treated… he could be helped… he had a second chance!!

I let my parents know and advised them that in just a few days the holding period would be done and if no one came forward, he could be theirs.

It seemed like forever, but finally, the day came and I was able to take the pup to them. As I unloaded the precious cargo for my parents, the pup was obviously delighted to see them; wiggling all the way over to greet them once again.

I bent down to give him another hug before I left and as I stood, I asked if they had decided a name yet. Donna looked down lovingly at the pup and said, 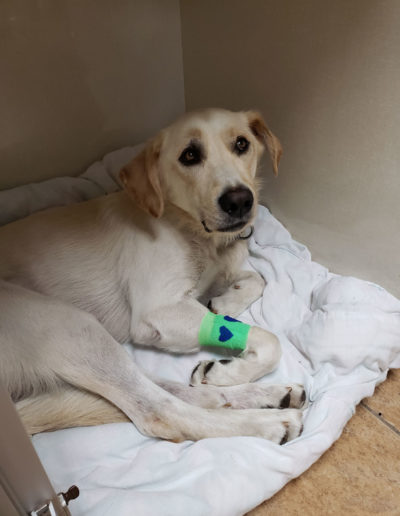 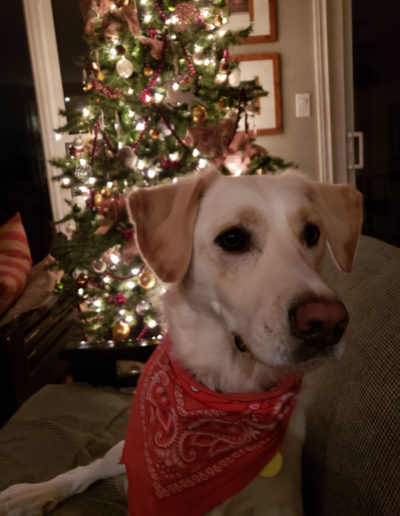